Blender is an Open Source 3D modelling- and animation tool.
– Today I found out it also does video editing!

It is well known that the Open Source community has yet to produce decent video editing software. But being stubborn and this being a small project I didn’t want to buy one of those large, expensive video editing suites.

Blender to the rescue

In order to use Blender as a video editor the first thing you need to do, is to switch the window layout to “Video Editing”. (There’s a dropdown in the top menu bar) 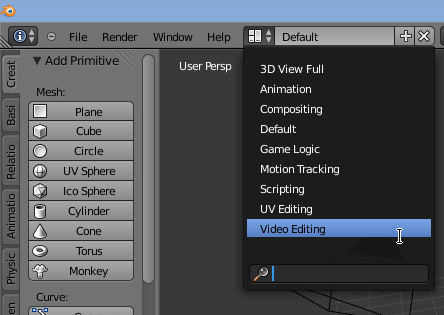 In this view you should be able to see the timeline at the bottom of the window. Here you can drag video files and images into your movie project’s timeline. The timeline is called the Video Sequence editor in “Blender speak”. The imported clips and images will be placed at the time slider (the green vertical line on the timeline)

Left clicking on the timeline sets the time slider and updates the scene view accordingly. The scene view is a preview of a specific frame in your movie project. This also means that you cannot move clips in the timeline by clicking and dragging them.

Each clip is called a Strip.

You select strips in the timeline by Right clicking. Moving strips is done by pressing G [Grab]. Having selected one or multiple strips by right clicking, and then pressing G, the selected strips will follow your mouse as if you were dragging. You should not hold down any mouse or keyboard button while doing this.
Left-click to end the move. Right-click to cancel the move.

Pressing G while moving strips will change the “move” mode. The default state is that if you move a strip on top of another the other strip will be cut (shortened). The other mode will not shorten other strips, but simply move them to make space for the moved strip.

To shorten or lengthen a strip you can select one of the “handles” (the small triangles) at each end of the strip and moving them same way you select and move the whole strip.

When you have selected a strip you should see a panel to the right of the timeline called “Edit Strip”. In this panel you can edit the properties of the strip. For example you can choose whether it should be played forwards or backwards, or that only every second frame should be shown (this is called Strobe).

You can watch your current movie project by pressing Alt-A. I recommend choosing the Sync Mode called AV Sync. Otherwise you risk the video and audio going out of sync while you watch your project, and the time slider might not show the correct position. In principle the Frame dropping setting for the Sync Mode should be better, but it didn’t work for me.
To find the Sync Mode menu look for the text “No Sync” at the bottom of the Blender window.

To scale a strip (make it smaller or larger), you can add a transform by selecting the strip, then in the menu below the timeline `Add > Effect Strip…

Transform`. You can then select the Transform strip and choose the settings for the effect.

The values of the effect can be changed by clicking the value and dragging left and right.

As Blender is mainly a 3D modelling and 3D animating tool, saving your movie is called “rendering”. In the lower left corner of every window “tile” (the scene view and the timeline for example), you can choose what kind of editor should be shown in this tile. Rendering can be done from the an editor called Properties. The first pane of the Properties editor is a small camera icon: this is the rendering pane. Here you can choose the output format, frames per second and so on.

Rendering can be stopped by pressing ESC. The frames rendered so far will be saved to the file (i.e. they will not be lost).

Blender is an awesome powerful tool – 3d modeling, 3d animation, compositing, video editing, and even a game engine is included in Blender.

But Blender is not for the faint of heart. The interface (in my opinion) is not optimized for newcomers or intuitive use. Rather it is optimized for effective use by experts. This means you have to accept things such as not being able to drag strips in the timeline by holding down the mouse, and that saving your movie is done via the “Properties” editor.

Because of this, I see as tool Blender similar to Vim – powerful, but with a tough learning curve.

For small strips I found it hard to select (click) the left and right handles (the beginning and end of the strip). Luckily there’s a menu below the timeline called Select which has a Right Handle and a Left Handle item. By right-clicking on either of those you can assign a keyboard shortcut to that menu item.